Today I finished my second heldrake, using all Vallejo Model Air paint and a lot of patience! BuyPainted's Heldrake Video inspired me to go for this paintjob.

I started by preparing the model removing all mold lines and covering it with Vallejo Air Primer in black and by preparing stencils. I cut the stencils from rigid plastic, one with a bunch of drop shapes and another one with wavy lines. 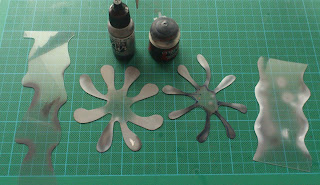 Since this was my first time with stencils, I had to do some testing. I ended up using the two stencils on the right to lay out the flames. I put the two paint containers in the picture for scale. The process is quite simple and uses the fact that airbrush paint has significantly different visible coverage between dark and light base colour. By laying out the bits you want in a colour in greys and whites on a dark background, you get the option to then just cover the entire surface in the colour you want and it looks like a perfect hit.

I did this for all the eight wing parts on both sides. For the rumps sides I did something similar, but all other armor plates like the neck, back and small bits just got hit with a mixed up camo-like pattern. Some VMA Black Metal and VMA Tank Brown covers the claws, chest and organic bits. That left the model looking like this. 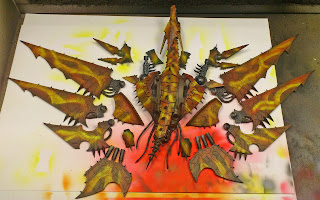 I wasn't sure if I would go with a bright metal trim colour like BuyPainted model or go for something dark, either flat black or black metal. Since I didn't want to make it a ball of sparkles, I picked going with dark trim. I used VMA black to paint all the edges and lines in matt black. There sure are a metric ton of lines on this. 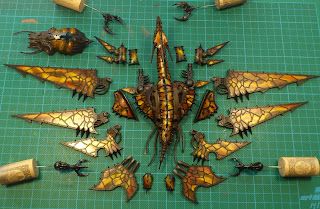 With the basic armour plates complete, I added VMA Black Metal to the spikes on the wings, the neck and back and the exposed mechanical parts in the rump. To mute this a bit and cover the fact that I had utterly forgotten to get some nice highlights going on the tank brown, I liberally washed the brown bits with Citadel Nuln Oil shade.

Then I put it together. The arms with the wings and the neck, head and maw weapon are magnetized, just like on my first heldrake. Then the model looked like this: 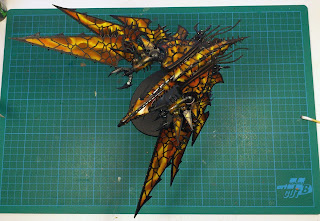 The view from below is nice as well (IMHO). The chest goes nicely from black metal to tank brown via the glow that I put in the chest using the same method as the flames on the wings. 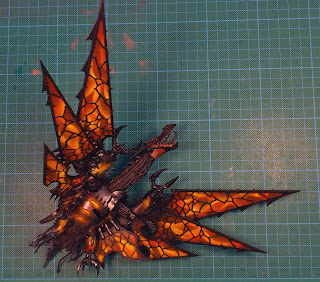 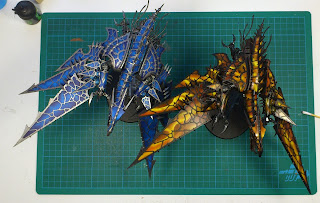